Artists Work
Prior to taking up the residency at Highgreen Karen had been living and working in Bochim, a heavily-populated city in Germany’s Ruhr valley. The artist had exhibited and performed widely in this country, in Japan and across Europe. Karen Rann continued to make installation pieces during the residency. They were still suspended pieces and dealt with light and shadow, spaces, shapes, openings and interiors. Formerly these pieces were often made in paper or fabric suspended from threads. At Highgreen Karen began making large suspended air-filled shapes using grasses gathered on the estate. Their fragile appearance belies the strength in their construction; the shapes are taken from nature and include helix, shell and cell forms. “Here surrounded by such beautiful, such ‘deep’ space, I have found a qualitative difference in the time afforded me to focus on and make art. It’s been a special honour to be welcomed into such a rural and isolated community.”

Work in the Community
Karen Rann designed and worked with the children of West Woodburn to make a semi-permanent piece out of natural materials and plastic to suspend from the ceiling of one of the classrooms. At Greenhaugh she designed a piece to hang in the school hall’s triangular-shaped roof void and all the children made elements of it during workshops. And workshops with children from Clases 3 and 4 at Otterburn First School resulted in a huge colourful wind sock out of pea netting and coloured carrier bags which was very effective. 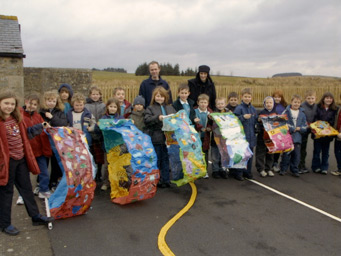 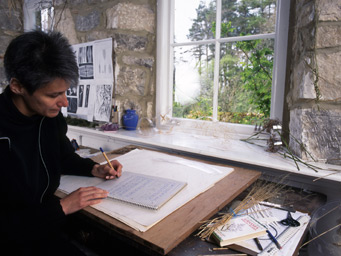 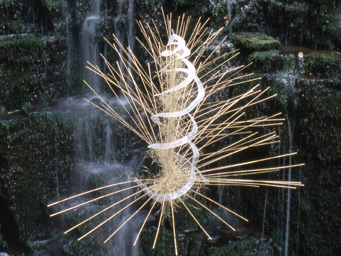