Artists Work
Nicky Coutts works with photography (particularly in manipulating found photographs) but also works in film, video and sculpture.She studied at Chelsea College of Art and the Royal College of Art and has exhibited extensively in this country and in New Zealand and Japan. Until spring 2009 she was Fine Art Fellow at Middlesex University and a visiting tutor at the Royal College.

Series and pieces of work completed during her period in residence have been:Film: ‘Passing Place’ Made through re-enacting scenes from six feature films where significant moments occur at crossroads. The films are Per Paulo Pasolini’s Oedipus Rex, Jilm Jarmushch’s Down By Law, Rebert Zemeckis’ Castaway, Maya Deren’s Divine Horsemen: The Living Gods of Haiti, Stuart Rosenburg’s Cool Hand Luke and Luis Bunuel’s The Discreet Charm of the Bourgeoisie. All the scenes were shot at the crossroads between Greenhaugh and Highgreen. Parts were played by people who live nearby and know this particular crossroads well. What is shown here are the edited scenes. The final stage, still to happen, is the editing together of these scenes non-sequentially to make the finished film Passing Place. Levitations: A series of photographs of attempted levitations based on existing imagery of others who have either been prone to levitation (e.g. St Joseph of Cupertino), have attempted to fly (e.g. the artist Yves Klein, and based on his attempts, Paul McCarthy), or are represented moving between the mortal and immortal worlds, such as Bosatsu’s and Amida’s flotation on Clouds and the Japanese Pure Land sect. Change of Heart : A series of paintings on photographs. Wandering the moors you come across huts and shacks cobbled together from whatever must have been lying around. As an incomer you can only guess at the purpose of these remote shelters. Every time you pass them, they seem different depending on the light and height of the sky. In this series of paintings on photographs the weather has been changed, using the enamel paints modelmakers often use to camouflage miniature battleships or a legion of toy soldiers. The weight of the paint bulges on sky lines. These eyries often continue to offer the only protection from the ever-changing elements. No one belongs here more than you.  This ‘cabinet of curiosities’ is installed on the roadside opposite the main entrance to Highgreen Manor and can be seen 24 hours a day. See location map below if you want to find it. The cabinet contains over 100 objects made by visitors to the studio over the winter months during the residency. They were asked ‘If you had a God what would you offer?’ The votive ‘offerings’ were made of air-drying clay sprayed with metallic gold paint, giving them the appearance of increased value. Behind them, on the backboard of the cabinet, is a trompe l’oeil painting of the fells burning. Titled after Miranda July’s novel No one belongs here more than you, the cabinet is lit by solar panels from the rear so that this ‘shrine’ glows at night.

In May 2009 Nicky and another artist, Liz Murray, attended a paranormal event held at Kielder Castle. This event inspired a number of pieces including a video, sound piece and a series of images. A focus for this work was created in the form of a ‘Spirit Hut’. The film and spirit hut formed the focus for an exhibition at Waygood, High Bridge, Newcastle upon Tyne, ‘Is Mary Here Again?’; 22nd July – 15th August in which Coutts works with artist Liz Murray. Here the sound recorded at the paranormal event, including mediums’ voices calling the spirits, was played out through speakers in to the street. In the gallery sensors picked up sounds from the building site of the new gallery/studios behind the temporary exhibition space.

At the end of residency exhibition in September at Highgreen the spirit hut was re-created with sensors placed in Highgreen Manor’s attic, picking up sounds there and playing them out into the Spirit Hut in the exhibition. Some of Nicky Coutts’ pieces; the film Passing Place and framed stills from it and the series of painted photographs ‘Change of Heaert’ are being shows now at Queens Hall Arts Centre, Hexham until 21st November.

Work in the Community
During the residency Nicky led a series of workshops working with clay. Many local people and visiting groups from Thomas Bewick School, Newcastle and Rothbury Middle School enjoyed them. Blindfold exercises to make small self-portrait clay heads led to the creation of life-size self portrait clay heads. At follow up workshops these were painted, sprayed or burnished. There were some wonderful resulting ‘heads’ that were displayed at an open day in April.  Everybody who visited the studio, including workshop participants, were invited to make clay ‘votive objects’. They were asked ‘If you had a God what would you offer?’ Each object was sprayed with metalllic gold paint and it is over 100 of these objects that fills the ‘cabinet of curiosities’ installed on the moor at Highgreen. 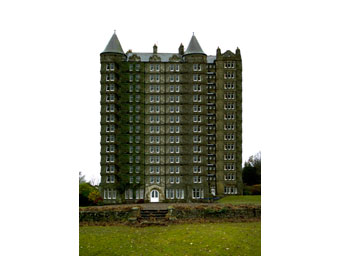 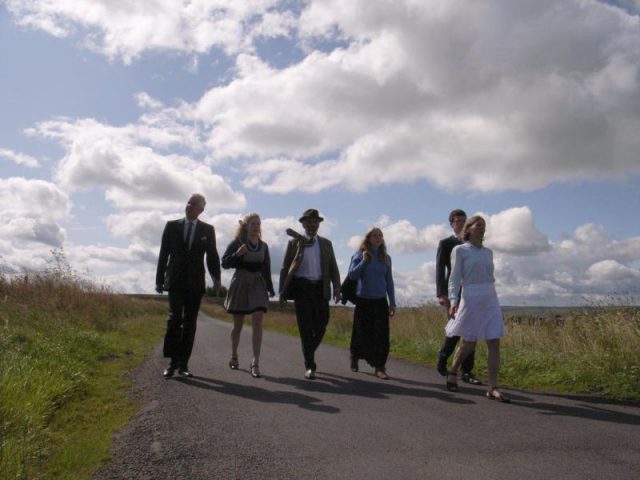 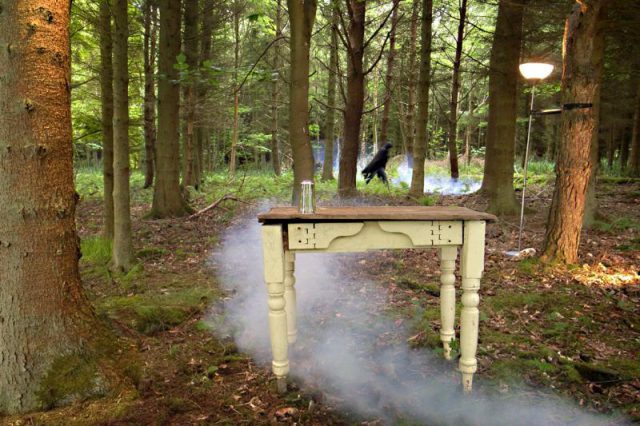 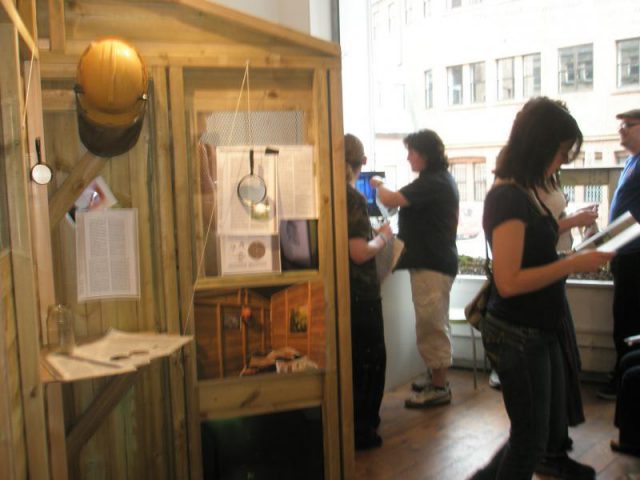 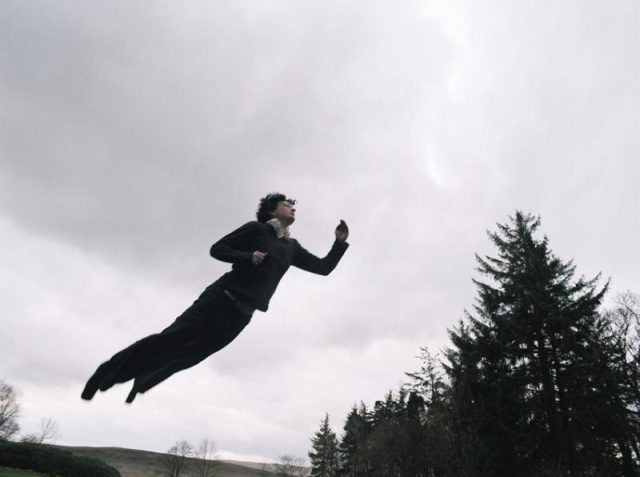 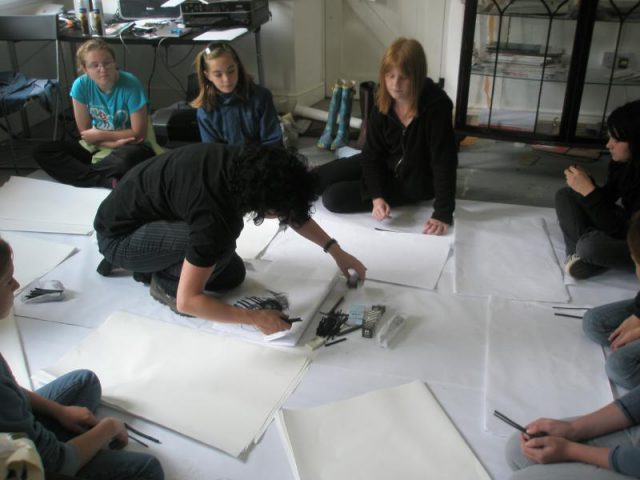 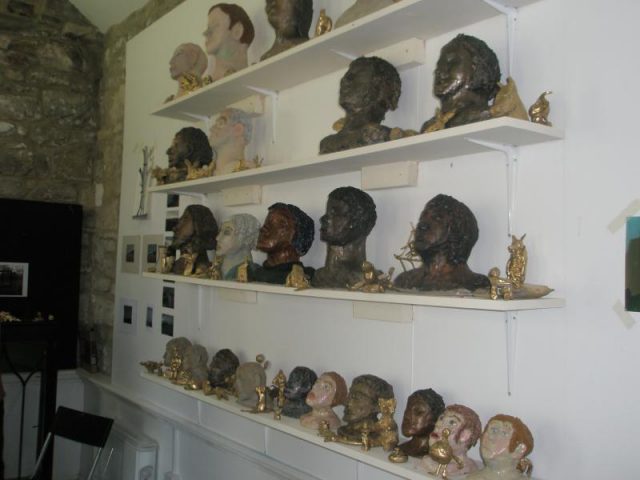