Artists Work
Nigel sees himself as a ‘landscape artist’. He takes his points of reference from the landscape. He draws and makes sculptures that investigate the relationship between the elements that make up his surroundings; the space and the forms. Until Nigel came to Highgreen he found inspiration in the building sites, industrial estates and retail parks of Sunderland and his materials were those he found discarded in the built environment.

At Highgreen Nigel’s interests remained the same. But he had to find ways of interpreting the very different landscape of Tarset – the folds in the hills, the contours and land masses, its features, wide horizons and the sky – instead of the industrial urban environment. His explorations started with photographs and drawings; drawings that ‘map’ the landscape, identifying the spaces between features and the relationship between them and between the land mass and the sky. Using the drawings as starting points Nigel carved and shaped irregular lengths of tree wood to represent the linear forms in the landscape – the horizons and contours; constructing interlocking block shapes that refer to geological formations and carving lumps of wood into valley bottoms. The finished pieces bring mass and line together in strong and beautiful harmony; a wholeness that echoes the surrounding landscape.

Work in the Community
In November 2003 Nigel gave an illustrated talk at Byrness First School for pupils, staff and people living in this isolated village. As a result he led an Art Club for adults in Byrness on a Wednesday afternoon for six weeks during the Winter for local people. Then in March pupils from the school, staff and Byrness villagers visited Highgreen for a day to do arts activities with Nigel. Byrness School has since closed down and pupils have moved to Otterburn First School. In Summer 2004 Nigel led a sculptural project over 3 days with the 20 Year 4 pupils from across the local First schools (Kielder, Otterburn, Greenhaugh and West Woodburn) that feed into Bellingham Community Middle School and with a group of Year 5 students from Bellingham Middle School. This brought together children as a peer group that rarely get a chance to meet and hopefully helped with their introduction to the Middle School – aswell as creating large montage panels later displayed at Bellingham Middle School. Nigel Morgan spent much of his contact time with young people. He ran an evening session with young people from Simonburn Youth Club in December 2003 and spent a number of evenings with members of Otterburn Youth Club making. Children made plaster casts of their hands and individual 3D creations to hang on a large frame in the entrance to the Centre. And, also that summer, Nigel and sculptor, Sally Matthews, together led a series of evening workshop sessions at Highgreen for young people – Stonehaugh, Bellingham and Otterburn youth clubs all took part. These resulted in some marvellous ‘birds’ that roosted on the lawn at Highgreen. 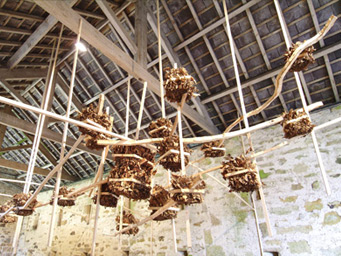 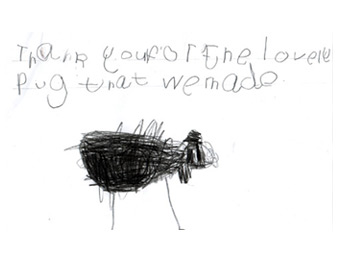 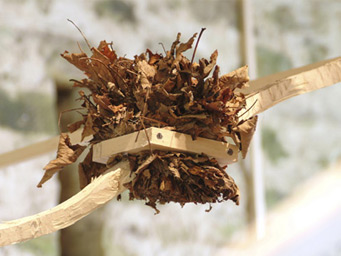 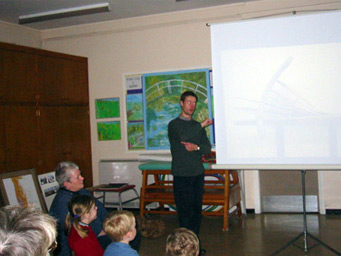 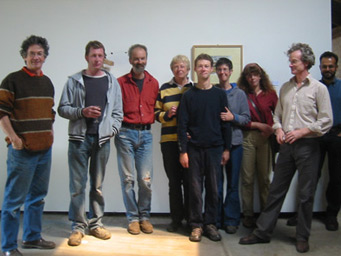 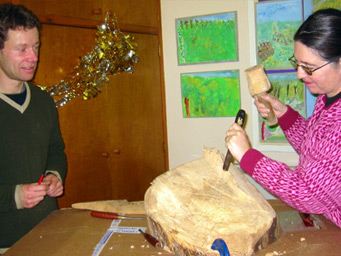 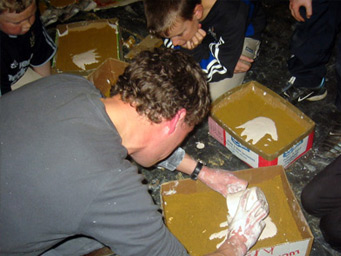