Layerscape (peat bogs) comprises of a 16mm colour film and an accompanying soundtrack which looks to discover the natural landscape of peatlands and the behaviors of its natural plant, animal and human communities. The style will be slow, inspired by the actual collecting of the footage over the twelve months of the year with the intention of presenting this piece as a captured sonic and visual essence of peat bogs and to frame their environmental importance.

‘Peat bogs and mires have always intrigued me – ancient, breathing, stratigraphic sponges with continuously changing habitats. Peat grows slowly at 1mm each year in an ongoing cycle of expansion. Their highly acidic conditions result in a very slow decay.

The fact that film relates directly to the light from the environment to which it is exposed, is important and the feel of real film will add to the otherworldly and ethereal nature of the subject. It is important that every captured image will be a focused study of the area and carefully selected – as if archiving and preserving a visual piece of the landscape, mimicking the action of the peat lands – which is something film will engender as we will not have the option of simply pressing delete and shooting again.

Over the last eight months we have explored the vast and different peatland landscapes of the north pennines and Northumberland. Slowly experiencing the shifting and passing of time through the landscape – observing the power of nature to heal itself.  We have immersed ourselves sonically and visually into the many levels and colours this magic land contains, from the vast landscape to the macro and the micro and back again. An absorbing voyage outward and inward from the familiar human scale.

I have met a number of inspirational people who have shaped the research and understanding of the subject matter.

Over the summer months the peatland landscapes visited have been very wet. Heavy rainfall in August was evident in how spongy and leaden the sphagnum moss felt beneath my feet. The fizzing sounds of mosses holding and releasing water have stayed with me. The subtle changes experienced, from revisiting these different landscapes, appear like slow time lapses in my mind. One spends hours in a landscape with no one to be heard or seen. Trans Atlantic flights and Chinook helicopters slice through the sky above, reminding me of my geographical position in the world. August saw ling heather appear in full effect. Close up, a beautiful deep purple of intricate and delicate flowers, from a distance a glowing shimmer of colour. This is a moment of loudness for these subtle upland hills. However, this short lived moment of intense colour ends suddenly – Autumn has arrived.

Looking at the deer grass against the heather at twilight whilst stood on Felicia Moss, one of the 57 mysterious and amazing border mires in Kielder forest, revealed a kind of afterimage, where the grass seemed to float before my eyes. Crowberry’s and cranberry’s were out and the delicate bog rosemary had come into flower. Bog asphodel is now deep orange instead of the bright yellow it wore in June and July. Sundews everywhere.

‘Wind and running water was prevalent on the peatlands of Allendale Common. When thinking about sound and how Lee has to work with wind it is important to know that this also plays, along with frost and water, a part in erosion of peat.

Mid September, when we visited Moor House reserve, it felt like the landscape was having a moment of reflection, a pause, as the pace slows down with the onset of autumn. Mosses and likens untouched by the changing seasons hold strong against the diverse plant matter that will become part of this decomposing history.’

Layerscape (peat bogs) was shown for the first time on 18th March 2012 at Moor House National Nature Reserve, Upper Teasdale as part of AV Festiva 12: As Slow as Possible.  100 people booked to see the screening at this very remote venue. 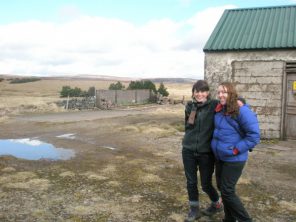