Marek Gabrysch and Lindsay Duncanson are making an artwork entitled Sodium Orange to Red Shift. They have been working with groups and individuals in Tarset and Newcastle.  These have included a group from Redesdale Woodcraft Group with whom they visited Black Middens at night.  They looked at stars through telescopes and binoculars and talked about mapping stars.  They have held a sound session with children from Bellingham First School making imagined and interpreted celestial sounds and a performance was held for parents.  Marek and Lindsay have also met twice with the Tarset Rievers singing group. In the last session they explored vocal interpretations of the Dopler effect (red shift) and worked on interpretive and improvisational techniques with the Rievers to create a sonic score from the constellations of stars.  A sample of some of the rich sounds produced can be found atwww.soundcloud.com/productofboy/tarset-constellation-1  And they will be spending a day, along with a visiting astronomer, with children of Greenhaugh First School for a Dark Skies day.

In Fenham, Newcastle the artists have also been working with a Woodcraft group.  On Fenham Moor they played constellation games with them; making stars and moving around with them.

Marek and Lindsay have found a street in Newcastle called Tarset Street and they have been taking night photographs and sound recordings here as well as in Tarset.   In both locations they have got series of 300 x 30 second exposure photographs per night.  In the city centre these capture the orange glow and in Tarset they have caught the movement of stars and a meteor across the skies above the moors.  This night footage and imagined and interpreted celestial sounds will be gathered into the finished piece; a sound and light installation piece which will be shown at a venue in Tarset and in Newcastle in February.

The artists have been visiting Tarset and the choir has been singing with the skylarks on the moors.

Exhibition travels to Tarset and Newcastle 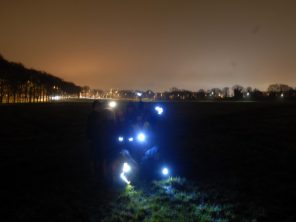