Over the week-end 4th – 6th June 2010, VARC celebrated its tenth birthday with a special creative and participatory event at Highgreen that brought together artists, visitors and local residents. Past artists in residents and other artists who have worked on VARC projects took part as well as the current aritst in residence.

Some artists were commissioned to make new temporary pieces of artwork. Others presented or re-created pieces originally made when they were artists in residence, or worked with local people to lead creative workshops for visitors. Also on show was artwork made by artists in receipt of funding from VARC to realise specific projects.

The  weather was glorious, the artwork made and presented was amazing set in Highgreen’s outbuildings, garden and surrounding moorland and there was a wonderful atmosphere with local people, artists and visitors. Saturday’s full programme ended with a hog roast and ceilidh in the barn which was hugely enjoyable.

VARC is very grateful to the generosity of Cynthia and William Morrison-Bell in offering their home as the venue for the event and for all the support they have offered VARC on this occasion and over the years. We also give thanks to Arts Council England and Northumberland National Park Authority for their financial support in hosting this event and to a-n The Artists Information Company for support with its promotion.

Gavin Thorogood and James Wyness
Curse of the Hollow Stones
Visual artist, Gavin Thorogood, and sound artist, James Wyness, produced an audio-visual work that combines sound composition with illustration, text and spoken word. It immersed the user in the setting of a fictional work. Direct observation and factual elements of the space served as a departure point for the work’s development.

Linda Gordon and Lucy Andrews
Divining Rods
In a clearing beside Highgreen Manor the artists created a drift of tall wooden poles, like a small copse or thicket. From them, the eye is drawn outwards towards expansive views of surrounding landscape. The curved meandering form of the work suggested a hidden flow of energy, an underground stream perhaps. The massed upright poles were like mighty conduits of some vast elemental force from beneath the ground.

The dispossessed traveller
Once following the stars, now here uncharted.
From the chaos of unknowing:
An emerging shelter; a beacon; a wayside shrine.

Susan Grant and Adrian Lear presented a site-specific installation occupying a remote hilltop building, believed to be constructed from reclaimed elements of a tin-hut-church that once housed the small Highreen Estate Anglican congregation. Creating a series of interventions in this space using light, sound, found objects and sculpture, the work re-imagined the site as one of retreat, of encounter and of passage.

Violet Bennell, Thomas Whittle, Theo Harper Davis, Robbie Hudson
Over, Cover
This piece mimiced the increase of speed in today’s society; things get put up and taken down, with no time to reflect on time passing in our surroundings. This collaboration recreated generations of rapid change within a short period of time, recreating society’s obsession with vast quick development.

Visitors to the event were invited to help build a structure using a basic material. Once completed it was photographed and dismantled and then recreated again. This process happened time after time by a succession of visitors; on each occasion using an additional material until, by the end of the weekend a final structure was completed.

Karen Rann and Helen Goodwin
Temporary Connection
Karen and Helen made an installation at the site of the old`Pheasant Field’ on the hillside opposite Highgreen. Focusing on the process of making rather than the creation of a finished product the artists worked in and with the field throughout the installing and exhibition days. The process was documented daily and the resulting photos displayed within one of the outbuildings.

Nigel Morgan
Northumberland Drawing
Nigel re-created a piece he made during his residency at Highgreen in 2004. Sited in the Danish Barn at Highgreen carved and shaped irregular lengths of tree wood represented the linear forms of the landscape.

Thomas Donaldson
Angel
Thomas Donaldson, who was artist in residence in 2003, now lives in Thailand and sent a stencil design for the door of one of Highgreen’s outbuildings. Out of context, the stencil features a solitary Thai beggar girl which the artist hopes will raise questions about migration and poverty, since in most cultures migration from the rural environment to the urban one is driven by a search for prosperity; a dream for a better life rarely fulfilled.

Nicky Coutts
Passing Place
This film was made by the artist during her residency at Highgreen 2009, produced by re-enacting scenes from six feature films where significant moments occur at crossroads. All the scenes were shot at the crossroads between Greenhaugh and Highgreen and parts are played by people who live nearby and know this particular crossroads well. The film was shown on a monitor in the potting shed.

Imi Maufe
Community Map Artwork
Imi ran a roving workshop that looked at and documented people’s journeys to Highgreen. Lots of people contributed and an artwork resulted that provided a lasting record of the community of people that took part in VARC’s birthday celebration.

‘For me the name Black Middens presents the possibility of a place where colour has been consumed, as if the site were a black hole sucking colour towards it. The VARC project funding enabled me to invest in new equipment and gave me time to develop new approaches to working with colour and colour coding in relation landscape. Working with sound artist Phil Ogg, I have combined sound, digital photography and colour information to make a digital animation. ‘

This piece was made with funding from VARC’s Artists’ Projects Fund.

Linda France and Kim Lewis
Border Song (work in progress)
Border Song was a collaboration between poet Linda France and artist Kim Lewis, imagined as a hymn of praise in words and images to the landscape and life of the North Tyne Valley in Northumberland. This piece was being made with funding from VARC’s Artist’s Project Fund.

Jilly Morris
Open Studio; Work in Progress
At the time of the event, Jilly Morris was the current artist in residence. Visitors were able to see finished pieces and work in progress, and talk to her about her experience as resident artist.

Steve White
Film-maker Steve White documened the year spent at Highgreen by the then artist in residence, Jilly Morris. A five-minute sample told the story of the artist’s arrival at Highgreen from Bristol, her early exploration of the place and development of her work.

Workshops
There was a variety of creative workshops which lots of people enjoyed:

Walks
Exploring the landscape was a very important pat of the weekend. Two of the artworks were located a short walk from Highgreen where views of the moors were all around.   Informal walking maps were provided for people to enjoy their own walk in the surrounding countryside and a guided walk was led for those who wanted by experienced walk leader and local resident, Maureen McCracken. 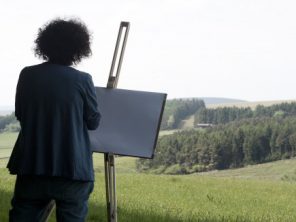 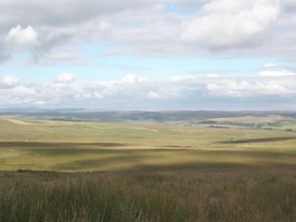 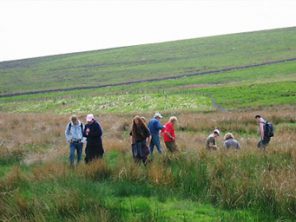