During spring 2015 Artist in Residence, Khosro Adibi and fellow artist Karen Rann led a project with students and staff of Thornhill Park School in Sunderland.  The project included a full day visit to Highgreen by students where activities included exploring, weaving, big painting in the barn and den building in the woodland as well as a picnic with baked potatoes around a bonfire.  The day was hugely enjoyed by all the students.

The following week Khosro and Karen spent three days at the school working with the students there.  In advance of this Khosro had prepared the skeleton frameworks for a number of ‘giant bugs’.  These needed work to complete on site with which all the students helped.  There were three big bug structures completed which will be permanent resources for the school so staff and students can continue playing and adapting them as they wish in the future.   There were also extra hoops and games suspended from the trees.  The students also made and painted smaller bugs made from plastic bottles which were installed around the garden plus bug costumes.  Musical instruments in the form of ‘bug’ maracas were enjoyed too.

‘Working outside… students were more expansive, keen to explore and invent games around the structures.  Children who don’t normally interact well together were playing with each other.  Students were crawling through and leaping over the structures.. gaining physical activity, dexterity and coordination..  The final afternoon the sun shone, we played, made costumes, made up games around the ‘bugs’ and sang songs; there was a real festive feel.’  Karen Rann, artist

The whole project and the creation of the giant bugs, now with a permanent resource  at Thornhill Park School was made possible with funding from the Ernest Cook Trust and the Rothley Trust; for which we and the School are extremely grateful.

In 2013 a three day project was held at Thornhill Park School during which a major feature was the aerial rig and expertise provided by Bare Toed Company.  Students were able to have free movement whilst held safely in hammocks suspended from the rig.  Whilst held in this way, students could be creative with ‘big painting’ on surfaces on the ground beneath them.  This provided an amazing experience for the students.

Twenty young people with autism spectrum disorders and accompanying staff visited Highgreen in June 2011 to conclude the project. They spent the day exploring Highgreen and taking part in a range of activities including drawing,printmaking, making rubbings, making plaster plaques and creating a suspended bird out of found branches.    The day’s arts activities were led by Jenny Purrett and Julia Barton and Maureen McCracken led the walks.

At the completion of the project the school still had a bit of funding left un-spent.  Staff chose to use it on making another visit to Highgreen because they feltthe students gained so much from this.   Two groups came to Highgreen in May 2012.  They enjoyed a range of craft and art activities in the barns and, in the woodland nearby, they made shelters with LEO. 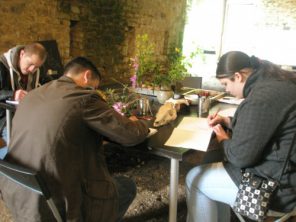